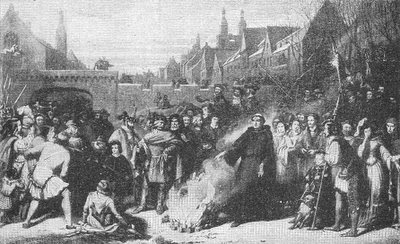 Matthew Bellisario continues his analysis on Martin Luther. His recent post is entitled, The Tragedy of Luther's Hatred: The Last Days . While I don't plan on going through its entirety, I did want to demonstrate what happens when one doesn't actually read Luther, but relies on outdated scholarship like that used in the Catholic Encyclopedia.

These are not the only examples of his pathetic spiritual condition. It is written that his last sermon was not one of hope but of despair, "His last sermon in Wittenberg (17 Jan., 1546) is in a vein of despondency and despair. "Usury, drunkenness, adultery, murder, assassination, all these can be noticed, and the world understands them to be sins, but the devil's bride, reason, that pert prostitute struts in, and will be clever and means what she says, that it is the Holy Ghost" (op. cit., XVI, 142-48). The same day he pens the pathetic lines "I am old, decrepit, indolent, weary, cold, and now have the sight of but one eye" (De Wette, op. cit., V, 778). Nevertheless peace was not his."(1) [Sources (1) Catholic Encyclopedia].

This snippet comes from the Catholic Encyclopedia:

His last sermon in Wittenberg (17 Jan., 1546) is in a vein of despondency and despair. "Usury, drunkenness, adultery, murder, assassination, all these can be noticed, and the world understands them to be sins, but the devil's bride, reason, that pert prostitute struts in, and will be clever and means what she says, that it is the Holy Ghost" (op. cit., XVI, 142-48). The same day he pens the pathetic lines "I am old, decrepit, indolent, weary, cold, and now have the sight of but one eye" (De Wette, op. cit., V, 778). Nevertheless peace was not his.

The first error is that this was not Luther's last sermon, as Bellisario states. This is was from the last sermon in Wittenberg, Rom. 12:3, January 17, 1546. Luther went on to preach five more sermons after this.

The second error is a complete lack of context, and missing the point of the context. Luther's sermon was on Romans 12:3, "For by the grace given to me I bid [every one among you not to think of himself more highly than he ought to think, but to think with sober judgment, each according to the measure of faith which God has assigned him." Luther begins by stating:

St. Paul, as was his custom, taught first the great chief articles of Christian doctrine—the law, sin, and faith, how we are to be justified before God and live eternally. As you have often heard and still hear every day, namely, that there are two points to be taught and preached: first we must see to it that faith in Christ is rightly preached, and second, that the fruits and good works are rightly taught and practiced. Faith requires that we know what sin is, what the law is, what death is, and what it does, and also how we return to life and abide in it. This is the way Paul teaches in all his epistles; first concerning faith in Christ. First he plants the good tree, just as anybody who wants to have a good garden must have good trees. This is what Paul does; first he sets out the wild trees [cf. Rom. 11:24] and teaches how we should become good trees, that is, how we are to believe and be saved. This he has been describing up to this point in the twelfth chapter. From here to the end of the epistle he teaches the fruits of faith, in order that we may not be false Christians, who have only the name of Christian, but rather real, true believers. This is the preaching concerning good works, which God commands, especially in the first and second table [i.e., of the Ten Commandments], that we, who have been redeemed through the blood and death of the Son of God, should live godly lives, as those who do not belong to this transitory life but rather to eternal life, provided that we rightly believe; in order that after believing we may not again follow the world, as Paul says in the preceding verse: “Be transformed by the renewal of your mind,” etc. from. 12:2].

Luther then expounds on the remnants of sin found in the lives of Christians: "After baptism there still remains much of the old Adam. For, as we have often said, it is tame that sin is forgiven in baptism, but we are not yet altogether clean.""The sin, it is true, is wholly forgiven, but it has not been wholly purged. If the Holy Spirit is not ruling men, they become corrupt again; but the Holy Spirit must cleanse the wounds daily. Therefore this life is a hospital; the sin has really been forgiven, but it has not yet been healed." Because of this, Luther says "there must be preaching and everyone must also take care that his own reason may not lead him astray." "Reason" is for Luther, a sin that adds works to God's works, and seeks to follow it's own path rather than than God's path. It is a harder sin to locate. and is typical of the fanatics. He expounds,

If we were wholly clean, we should not need everywhere the ministry of the Word. If we were altogether pure, we should have no need to be admonished, but would be like the angels in heaven with no need for a schoolmaster, and do everything willingly of ourselves. But since we are still confined to this miserable carcass—which in time the worms will devour, though it deserves something worse, to burn in hell eternally—it is necessary constantly to resist and put off the old man and his works and put on the new man, which is being renewed in knowledge after the image of him that created him [cf. Col. 3:10]. Usury, gluttony, adultery, manslaughter, murder, etc., these can be seen and the world understands that these are sins. But the devil’s bride, reason, the lovely whore comes in and wants to be wise, and what she says, she thinks, is the Holy Spirit. Who can be of any help then? Neither jurist, physician, nor king, nor emperor; for she is the foremost whore the devil has. The other gross sins can be seen, but nobody can control reason. It walks about, cooks up fanaticism [Schwärmerei] with baptism and the Lord’s Supper, and claims that everything that pops into its head and the devil puts into its heart is the Holy Spirit. Therefore Paul says: As I am an apostle and God has given me the Spirit, so I appeal to you [of. Rom. 12:1; I Cor. 4:16].

The point Luther makes is a comparison between obvious sins (gluttony, adultery, manslaughter, murder) and the sin of "reason" found particularly in the fanatics, groups Luther wrote and preached against his entire career. The Catholic Encyclopedia would have one believe Luther arrived at this distinction at the end of his life in despondency, Such is not the case. The same understanding of "reason" and preaching against the fanatics can be seen throughout Luther's written corpus.

The third error is confusing Luther's physical condition as an old man with a "pathetic spiritual condition." It is no secret that Luther suffered from many physical ailments. Yet, this did not deter him from his work, even to his final days.

The fourth error is missing Luther's sarcastic wit even during suffering. The snippet used by the Catholic Encyclopedia, "I am old, decrepit, indolent, weary, cold, and now have the sight of but one eye," is from an introduction to a letter. Luther writes, "Grace and peace ! I, old, weary, lazy, worn-out, cold, chilly, and, over and above, one-eyed man, now write you. And when I flattered myself that, half-dead as I am, I might be left in peace, it looks as if I had neither written nor done anything heretofore, so overburdened am I now with writing and talking. But Christ, who is all in all, is almighty, to whom be praise to all eternity. Amen."
Posted by James Swan at 6:53 PM

James, it is funny to see that when you find it beneficial to quote the Catholic Encyclopedia then it is a credible source. But when it does not benefit your position, then it is not worth anything. A double standard indeed. The next time you quote anything from the Catholic Encyclopedia to justify any argument you will be met with the same standard.

I have said more than a few times, the CE has flawed material on Luther. I never said every section of it was flawed. So yes, I will quote the CE when it is both right and wrong.

No, you will quote it when it benefits you. The Catholic Encyclopedia has the sources in it. It is just as credible as you are. I will take the Encyclopedia's sources on this one, not yours.

It's not my problem if you don't know the history of Catholic Luther scholarship, and about the author of the Luther article in the CE.

You quote from non-Romanist sources in your apologetics materials without attributing general credibility to everything they say. Then you say that Mr. Swan is using a double-standard for sometimes criticizing and sometimes quoting the "Catholic Encyclopedia"? Very interesting.