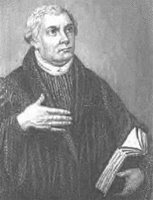 Here are a few quotes from Luther responding to a 16th Century Catholic apologist (Jerome Emser) who used quotes from the early church fathers against him:

"...they are afraid of Scripture, for they realize what unfamiliar ground it is to them. Therefore they labor painfully, with many turns and twists, to make it unnecessary for them to attack me with the Scriptures and to be defeated by the Scriptures. So they invent new lies, find daggers and spears and other fools’ weapons and declare the Scriptures are so obscure that they cannot be understood apart from the interpretation of the holy fathers, and that we must, therefore, not follow the text, but the glosses of the fathers. This is what Emser calls fighting with the blade and not with the scabbard. And when they are able to bring one saying of the fathers against me, they ring all their bells, beat all their drums, and shout aloud that they have won, stop their ears and shut their eyes, and imagine they have closed and sealed all the Scriptures for me."

"In order that these word-jugglers may be seen in their true light, I ask them, who told them that the fathers are clearer and not more obscure than the Scriptures? How would it be if I said that they understand the fathers as little as I understand the Scriptures? I could just as well stop my ears to the sayings of the fathers as they do to the Scriptures. But in that way we shall never arrive at the truth. If the Spirit has spoken in the fathers, so much the more has He spoken in His own Scriptures. And if one does not understand the Spirit in His own Scriptures, who will trust him to understand the Spirit in the writings of another? That is truly a carrying of the sword in the scabbard, when we do not take the naked sword by itself, but only as it is encased in the words and glosses of men. This dulls its edge and makes it obscurer than it was before, though Emser calls it smiting with the blade.The naked sword makes him tremble from head to foot. But I cannot help him, he must take his punishment.

Be it known, then, that Scripture, without any gloss, is the sun and the sole light from which all teachers receive their light, and not the contrary. This is proved by the fact that when the fathers teach anything they do not trust their teaching, but fearing it to be too obscure and uncertain, they go to the Scriptures and take a clear passage out of it to shed light on their teaching, just as we place a light in a lantern, and as we read in Psalm 18:28 “Thou wilt light my lamp, O Lord.” And when they expound a passage of Scripture, they do not rely upon their own words and interpretation (for where they do that, which happens often, they usually err), but they bring another passage of Scripture which is clearer, and thus they interpret and explain Scripture by Scripture. My goats would soon find this to be true if they would read their fathers carefully, but since they simply skim over them and study neither the Scriptures nor the fathers, it is no wonder that they do not know what the Scriptures or the fathers teach.

I lose my patience when they thus revile and blaspheme the Scriptures and the fathers. They accuse the Scriptures of being obscure, while all the fathers deem them the light of lights, even as David says, “Thy word is my light”; and they ascribe to the fathers the light with which Scripture must be illumined, whereas all the fathers concede their own obscurity and illumine Scripture by Scripture alone. And that is the true method of interpretation which puts Scripture alongside of Scripture in a right and proper way; the father who can do this best is the best among them. And all the books of the fathers must be read with discrimination, not taking their word for granted, but looking whether they quote clear texts and explain Scripture by other and clearer Scripture. How should they have overcome the heretics, if they had fought with their own glosses? They would have been regarded as fools and madmen. But when they brought forward clear texts which needed no glosses, so that reason was brought into captivity, the evil spirit himself with all his heresies was completely routed."

Source: Martin Luther, Dr. Martin Luther's Answer to the Superchristian, Superspiritual, and Superlearned Book of Goat Emser of Leipzig, With a Glance at his Comrade Murner 1521, Works of Martin Luther III (Philadlephia: Muhlenberg Press, 1930) pp.332-335.
Posted by James Swan at 12:00 AM

Ironic how use of the Early Church Fathers has not changed much among those who support the Roman Church and its ever changing doctrine.

>>Ironic how use of the Early Church Fathers has not changed much among those who support the Roman Church and its ever changing doctrine.>>

Hmmm…and the ECFs were Evangelicals?

Sober assessment: the vast majority of the ECFs were proto-Catholics (Origen and the Montanist Tertullian being notable exceptions).

For an interesting study concerning the doctrine of justification in the early Church Fathers and the subsequent novelty of Luther and Calvin see this important ESSAY.

"Hmmm…and the ECFs were Evangelicals? "

Interesting. If the early Christians wre obviously not Papal Catholics, but rather "proto-Catholics," then why couldn't they be "proto-Reformed Catholics"? I mean, at that point in history all the peculiar Catholic teachings were non-existent. Hmm. This is a very intriguing thought.

So, then, the question would be: which is the legitmate development? And how do we know?