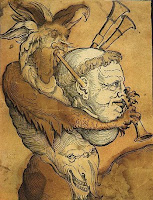 Here are some highlights from a Catholic going overboard on eschatology. I found this gem over on the CARM boards:

Luther: the fallen star of the Apoc's 5th Trumpet

Luther fell from grace and opened the pit of heresy, to loose the formal heretics who would torture the innocent heretics, by causing their loss of five sacraments, five months of supernatural torture.

Father Kramer of 1934 saw this in his Catholic Book of Destiny.

...when I was 13 and fascinated by Hal Lindsay's books. but I came back to my Catholic God in 1994, when I was 24, and have devoured the Catechism and theology and apologetics since then. In 2002, on June 6 (4004 BC + 2002 AD = 6006, or 6/6/6006 since the Fall, hmm, interesting...) I began to return to the apocalypse... I couldn't believe all there was to it was preterism. but i could see futurism wasn't the way either. I began to ponder the Beast, and its mystical meaning. That began me on a journey that has been breathtaking. If you ever became Catholic, you would become my biggest fan.

... Believe me, I am NOT a liberal on this. I am NOT relegating the book back to the first century like the guy Scott Hahn, whom I would like to deck to wake him up from his alice in wonderland approach.

For the record, I don't advocate hitting Catholic apologists.
Posted by James Swan at 11:30 PM