Deliver Us From Evil: The Catholic Church and Pedophile Priests 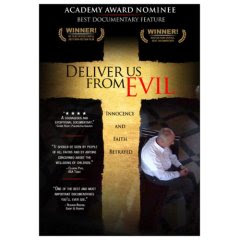 When I discuss Roman Catholic issues, I make it a point on this blog to try to focus on only theological and historical issues. In other words, I don’t spend time trying to prove the Pope is the antichrist, or Rome is the whore of Babylon. I also don’t spend time on how immoral particular popes have been. I recall many years ago having some good Christian friends hand me Jack Chick’s “Alberto” comic books: “James you have got to read these! The papacy is sending Jesuit spies into evangelical circles!” Even then, while young in age, and young in the faith, I was extremely skeptical of Mr. Chick's "work". I dislike those types of arguments maybe as much as Roman Catholics do.

That being said, this is an extremely difficult blog entry for me to write, and even my wife said to “leave it alone.”

Recently I watched a new documentary that just came out on DVD, Deliver Us From Evil: Innocence and Faith Betrayed. This documentary takes an in-depth look at child sexual abuse perpetrated by one particular priest, Oliver O’Grady.

Now look, I realize that not ALL priests are pedophiles. I also realize that Protestant ministers likewise have been caught doing all sorts horrendous crimes. In other words, I recognize that in terms of argument, a priest caught molesting a child does not prove Rome is false church.It does not prove all priests are criminals, nor does it prove any particular percentage of priests are sexual criminals.

Even while watching the DVD, my particular nature not to believe anything kicked in. I’m usually the guy who says: don’t execute that criminal, I don’t trust the American justice system. Particularly with a documentary, I realize there is an underlying agenda and worldview. I don’t trust documentaries. I do like them, but I don’t trust them.

That all being said, the documentary left me in tears at many points. If what the victims of this priest say is true, their lives were horrendously violated by Father O’Grady. Now, I do recall those cases years ago in which workers at children’s day care centers were put through the fire, only to uncover, the police influenced the minds of the children to accuse their teachers of abuse. Innocent lives were ruined by false accusations. The difference with Father O’Grady, is that he admits to his perverse crimes, and there were many. He was a predator of children for years.

Now, I’m sure my Catholic readers will stand with me and say: all predators, Protestant or Catholic should be stopped, whatever the cost. The thing about this video that stunned me, was the bureaucracy of the Roman Catholic Church. This guy was known to Catholic authorities as a pedophile, yet they allowed him to get away with it for years. Whenever he was caught, the church would move him somewhere else, only for him to have a new set of children to prey on. Those in authority over this priest had their own careers which could have been ruined by this man’s atrocities, so, according to the documentary, there were many cover ups.

The documentary also looks at how Rome is handling these type of cases. The documentary concludes Rome isn’t really doing anything. The most fascinating segment was watching some of O’Grady’s victims (led by a man who was a priest, or formally a priest) go to the Vatican, to plea with the papacy to take action, and to stop those like Father O’Grady, or to at least hear the pain caused by O'Grady. These victims were turned away. They would not be heard, by anyone.

The spoiler of this film must be said: O'Grady was convicted, and served some jail time. The documentary puts forth the notion that the Roman Catholic Church had the trial moved through the court quickly, because had it lasted longer, evidence would have been brought forth to show the church knew of his "problem" for a very long time, perhaps as far back as when O'Grady entered the priesthood. The US Government had O'Grady deported upon his release. Rome knows he's out of the United States. He is a free man, walking the streets in another country, and initially, not known to his new neighbors as an impulsive pedophile, with a multitude of victims, spanning years.

O'Grady will collect a pension from the Roman Catholic Church at age 65. The victims though, according to the documentary, have not gotten anything from Rome.

I recommend everyone get this documentary, even though it is an extremely uncomfortable to watch (as it should be). If you are a Roman Catholic, I challenge you to look into the facts of this case. If the papacy is not taking correct action against immoral priests, its up to you, her people, to get angry and demand they protect you and your children from men like Father O’Grady.
Posted by James Swan at 12:00 AM

A heart wrenching post. I was unfortunate to be the victum of abuse from a catholic priest, i also was the victum of denial and cover up by the church (in fact this priest was left in the parish for several months) But eventually the pope himself met with me to see if I was ok. The church is terrified and is running scared but there are good people there. I just pray they would respond

You are correct that these terrible crimes do not make the case for a false church. Yet you do have to ask yourself how so many priests could engage in this type of deviancy if they were truly saved (which is what you expect in a "true" church).

What these events do make the case for is the hypocrisy of this system. How could a whole hierarchy of the supposed "church of Christ" not only have many priests engaging in such perverse behavior, but others then participating by covering it up.

Doesn't quite fit with the recent quote made by the Pope:

"The church does not engage in proselytism. Instead, she grows by attraction," the pope said at the Mass.

By living charity day in and day out, he said, Christians release "an irresistible power which is the power of holiness."