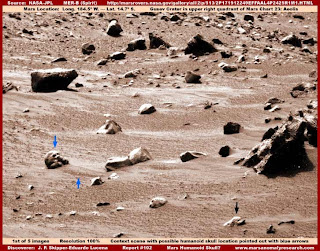 Why a picture of the barren landscape of Mars? Look close and you’ll see little arrows pointing to a rock. This is the famous skull face on Mars, which is really.... only a rock. This picture accurately sums up a link I was sent to an article on the church fathers and the apocrypha by a zealous defender of Rome, a person called “Matt1618”:

Did Some Church Fathers Reject the Deuterocanonicals as Scripture?

There’s nothing of substance in this link. It’s just like that skull face on Mars. One can write countless pages speculating about the skull face, but it really is an exercise in futility. It's a rock. That’s just like the link.

It’s a tough read, but the basic thrust of the argument is the early church fathers that spoke against the canonicity of the apocrypha did not in fact deny these books were canonical scripture. What they really meant was the apocrypha should not be used in the liturgy of a particular church. The writer of this link claims this argument is the work of Mark Bonocore (now with Catholic Legate). He quotes an e-mail he received from Mark back in 2001. I took about a half hour to search around to see if Mr. Bonocore wrote about this. I couldn’t find anything other than the link above, and also a few links from the same website quoting the same e-mail.

I don’t recall hearing this argument before. Bonocore is quoted as saying,

“…When some fathers speak of a particular book as "non-canonical," they do not necessarily mean that it is not inspired or authoritative. Rather, in many cases, they merely mean that it is not used in the Liturgy of their particular city-church ...thus it is a "hidden book" ("apocrypha"), which could be read privately for edification but not in the Liturgy itself (the public worship of the Church --"Lex orendi, lex credendi").”

Now, this is all a bit confusing. First, the assertion by Bonocore is made about the apocryphal books actually being canonical but not to be used in the liturgy, then the argument shifts to proving that the early church fathers were perhaps inconsistent in theory, but quoted from them, thus treating them as scripture.
Well, big deal. This principle of quoting from an apocryphal book does not mean that a particular church father necessarily thought a book was canonical. Talk about wasting one’s time writing to prove nothing, which is what “Matt1618” does. The ironic part of the argument is I could produce a number of quotes from Luther positively quoting from the apocrypha (he even preached from apocryphal passages occasionally), yet, I know of no one who would claim Luther treated the apocrypha as canonical scripture.

Time allowing, I’d like to examine some of the points made in Matt1618’s link.
Posted by James Swan at 10:07 PM

Matt quotes a number of church fathers there, Athanasius is an obvious one, is quoted as calling Wisdom "Holy Scripture". This is not just some church fathers quoting deuterocanonicals without ascribing them inspired status.

This people denied the Apocrypha too: