The 95 Theses: Nailed to the Church Door or Mailed to Ecclesiastical Authorities? 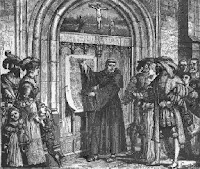 In the 1960's a Roman Catholic scholar took aim at one of the generally accepted facts of the Reformation: the nailing of the 95 Theses to the door of the Wittenberg Castle church door. Erwin Iserloh's book The Theses Were Not Posted: Luther Between Reform and Reformation challenges this dramatic aspect of Luther's story. He held the 95 Theses weren't nailed to the Wittenberg church door, but rather mailed to particular ecclesiastical superiors."Luther did not post the Theses but only sent them to Archbishop Albert of Mainz and Bishop Jerome Schulz of Brandenburg, the appropriate representatives of the church, for their approval" [LW 31:23].

Some of the Facts: Nailed or Mailed?
The genesis of Luther and the Wittenberg door story appears to have come from Melanchthon's Memoirs / Preface to the second volume of Luther's collected works (Wittenberg edition, 1546) [English, Latin]:


When Luther was in this course of study, venal Indulgences were circulated in these regions by Tecelius the Dominican, a most shameless Deceiver. Luther, angered by Tecelius' impious and execrable debates and, burning with the eagerness of piety, published Propositions concerning Indulgences, which are extant in the first volume of his writings, and he publicly attached these to the Temple, which is next to Witteberg Castle, on the day before the feast of all Saints, 1517.

Notice the Theses were "publicly attached" (or affixed). There's nothing at all about hammering a document to a door.  One other source from a few years before Melanchthon's text actually does though mention "doors", not "a door." Georg Rorer in 1540 mentioned "on the folding-doors of the churches" in a private note (see Franz Posset, The Real Luther, p. 23). Neither Melanchthon or Rorer were in Wittenberg in 1517, so whatever the origin of this story, it certainly wasn't an eyewitness account.

Luther himself never mentions anything about nailing the 95 Theses to the church door but rather explains how they were sent out to particular ecclesiastical authorities. The first bit of evidence is Luther's letter (or cover letter) to Albrecht from October 31, 1517 (LW 48:43) sent with a copy of the 95 Theses. Then in a letter dated March 5, 1518 to Christopher Scheurl, he states, "... As you are surprised that I did not send them [The 95 Theses] to you, I reply that my purpose was not to publish them, but first to consult a few of my neighbors about them, that thus I might either destroy them if condemned or edit them with the approbation of others. But now that they are printed and circulated far beyond my expectation." In a letter dated May 30, 1518 to Pope Leo he states, "So I published some propositions for debate, inviting only the more learned to discuss them with me, as ought to be plain to my opponents from the preface to my Theses." In a letter dated November [21?], 1518 to Elector Frederick,Luther states, "...[S]ome liars among ourselves falsely assert that I undertook the disputation on the Indulgences by your Grace’s advice, when the fact is, that not even my dearest friends were aware of it."He also states that previous to the 95 Theses becoming public, he sent two letters (to the Archbishop of Magdeburg / Mainz and the Bishop of Brandenburg). So from Luther's own accounts, he never mentions nailing the 95 Theses to the Wittenberg door. William Pauck notes,"...Luther, who had a tendency to speak freely about his career and who, in his later years,
loved to reminisce, never mentioned the incident. Moreover, there are no other contemporary sources which support the old story" [Olin, John (ed.) Luther, Erasmus and the Reformation (Massachusetts: Fordham University Press, 1969, p. 52].


Someone has observed that it is in the nature of German university life that a professor’s claim to fame, the ability to excite and to attract students to his lecture hall, often lies in his capacity to spin the web of awe and mystique over his audience, or to strike new lode by coming up with some novel, unique, controversial, often “way-out” position. This appears to have been the case with Erwin Iserloh’s widely read and disputed The Theses Were Not Posted [Word And Scripture In Luther Studies Since World War II (Trinity Journal Volume 5:16)].

Klug then recommends Kurt Aland's response to Iserloh: Kurt Aland, Martin Luther’s 95 Theses (St. Louis: Concordia, 1967). Klug affirms "Aland shows that there is no solid evidence to throw into doubt Luther’s own rehearsal of the event as occurring on October 31, 1517, with the posting on the Castle Church doors" (p.16). On the other hand, Roman Catholic writer Franz Posset says "Kurt Aland... tried to defuse the presented source material and digressed from the essential problem" [The Real Luther, p. 23]. The basic response to Iserloh can be summed up as follows:

1. There's nothing in any of Luther's statements that rules out a posting of the 95 Theses.

2. Melanchthon is to be considered a reliable source of information (as is Rorer) because of their close relationship with Luther. Even though Melanchthon's memoirs have minor errors, it is nonetheless reliable.

3. Wouldn't a contemporary of Melanchthon have questioned such a blaring historical error?

Argument #1 is an argument from silence. Argument #3 is weak, because (as far as I know) no contemporary of Melanchthon's stepped up to correct any of Melanchthon's minor errors. As far as I can navigate this controversy, the entire thing rests on whether or not one trusts the account of Philip Melanchthon. Roman Catholic scholar Franz Posset has recently written quite convincingly that Melanchthon's memoirs of Luther are to be trusted more or less, but yet states, "Did Rorer and Melanchthon concoct the Posting in good faith? It looks like it" [The Real Luther, p. 23]. I'm not so sure though that "it looks like it" settles anything.

Richard Marius rightly points out that "Luther always claimed to have gone through channels, and Iserloh takes him seriously, concluding that the Theses were not posted" (Martin Luther, The Christian Between God and Death, p. 138). Marius then asserts that "Protestant scholars have reacted with dismay at the shattering of an icon" which is indeed overstating the case. In an earlier work Marius calls this controversy a "furious scholarly debate" and Iserloh "succeeded in raising a bellow of outrage from those current disciples of Luther who cannot bear to lose a single glitter of their idol's glamour" [Luther, a Biography (Philadelphia: Lippincott, 1974) p. 70]. Marius has given this controversy more importance than it actually has.

Conclusion
It should be mentioned that even though a Roman Catholic, Iserloh was sympathetic to Luther. Otto Pesch points out that,


Iserloh's booklet of a few years ago on Luther's 95 Theses drew considerable attention. Even the treatment of this question from church history is characterized by a concern to present a true picture of the man Luther, and Iserloh was happy about the findings in his booklet, which rejects the story of Luther's nailing his theses onto the church door, not least because they succeeded in minimizing the picture of Luther as an angry revolutionary and placed the event which started the Reformation, stripped of all theatrical sensationalism, back into the form of a sober academic dispute [Otto Pesch, “Twenty Years of Catholic Luther Research” Lutheran World, 13, 1966, p. 305].

While I'm not any sort of scholar, I wouldn't be at all dismayed to find out the nails going into the Wittenberg door is the stuff of legend. Someone may say: "Who cares if the 95 Theses were nailed or mailed?" I can understand such a response.  What interests me about this is that to be consistent, I can't simply focus on the many Roman Catholic myths without taking a closer look at some of their charges of Protestant myth making from time to time. It is indeed the case that Luther's 95 Theses went 16th Century viral rather quickly. It is indeed plausible that the 95 Theses were posted as Melanchthon asserts.

The only real question in this controversy: is Melanchthon to be trusted? Unless someone can definitively prove that he cannot be on this point, Luther nailing the 95 Theses to the Wittenberg Door will remain part of the Luther story. If one reads Melanchthon's account, he doesn't appear to make it an outstanding central fact to Luther's story. That is, I see no reason why Luther's dramatic history needed to be embellished or concocted by Melanchthon with Rorer.


In 2006, Martin Treu from the Luther Memorials Foundation of Saxony- Anhalt rediscovered a handwritten comment by Luther’s secretary Georg Rörer (1492-1557) in the Jena University and State Library, which although printed, had so far played no role in research. Right at the end of the desk copy for the revision of the New Testament in 1540, Rörer made the following note: „On the evening before All Saints’ Day in the year of our Lord 1517, theses about letters of indulgence were nailed to the doors of the Wittenberg churches by Doctor Martin Luther.”

Now Rörer was also not an eye-witness, but he was one of Luther’s closest staff. The copy of the New Testament, in which he made his note, contains many entries in Luther’s own hand. The note right at the end of the volume leads us to assume that it was made at the conclusion of the revision work in November 1544. Directly beside it is another note, according to which Philipp Melanchthon arrived in Wittenberg on August 20, 1518, at ten o’ clock in the morning. This information is not to be found anywhere else and presumably came directly from Melanchthon himself. Rörer’s reference to the Wittenberg churches in the plural must be emphasized, as it corresponds to the statutes of the university. According to these, all public announcements had to be nailed to the doors of the churches.

You've gotta ask yourself one question: "Do I feel lucky?"