Do Not Pray To Fulton Sheen, Just Yet. 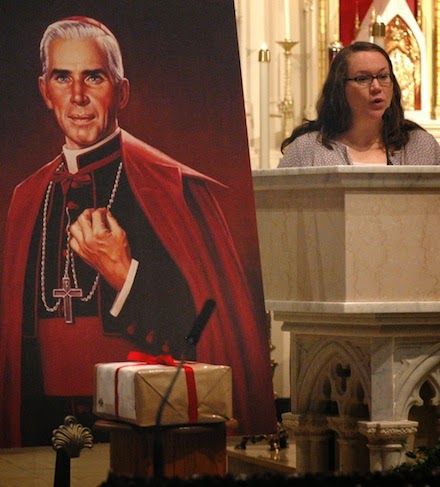 See: Mother who prayed to Fulton Sheen speaks of ‘confusion and sadness’ after Cause is suspended

"In March, a seven-member board of physicians convoked by the Congregation for the Causes of the Saints agreed that there was no natural explanation for why the child’s heart started beating over an hour after his birth. The child, James Fulton Engstrom, is now three years old and developing normally. His mother, Bonnie Engstrom, said she had no precomposed prayer asking for help from Archbishop Sheen. “I just kept repeating his name over and over in my head: Fulton Sheen, Fulton Sheen, Fulton Sheen,” said Ms Engstrom."

Q. 30. Do such then believe in Jesus the only Saviour, who seek their salvation and welfare of saints, of themselves, or anywhere else?

A.They do not; for though they boast of him in words, yet in deeds they deny Jesus the only deliverer and Saviour; (a) for one of these two things must be true, that either Jesus is not a complete Saviour; or that they, who by a true faith receive this Saviour, must find all things in him necessary to their salvation. (b)

Whether or not Abp. Fulton Sheen is "saved" is not in question in his cause for sainthood, assuming that is the objection being made here. I am saddened that the process is halted (I have blogged about this too), but I have little doubt as the the state of his soul.